For a while now, I’ve been wanting to do a case study on how to use commercial automation tools to optimize pop campaigns.

A couple of weeks back, I hit up Ervin and Losid from theOptimizer to gather some insight in preparation for the case study. During our conversation they mentioned a small test they had been doing with Afflow/Monetizer – that by setting a few simple rules on theOptimizer, they were able to optimize an Afflow campaign to green.

That got me excited. If you remember, around a year ago, I posted a tutorial on how to run Afflow on Zeropark, which can be found here:

Since the tutorial was first published, the game had gotten more competitive. So adding automation would definitely be a desired edge to anyone that wants to give the method a go today!

So I asked the gentlemen from theOptimizer whether I could share the results they were getting with all of you here on the forum, and they kindly said yes! This post is a result of that conversation.

All the data and tips below were provided by theOptimizer. Aside from minor editing to make things flow better, I haven’t made any significant changes. Enjoy the rest of the post!

This is a 7-week long case study, where the goal was to show that it is possible to optimize pop campaigns to green with 90% of the optimization being done using an automatic tool (we still adjusted bids & budgets manually).

This campaign is currently still running and generating profit. At the end of this post we will share all the information you’ll need to clone this camp and give it a go – including zeropark blacklists/whitelists, targeting, bidding details and tips, as well as the exact offer IDs from Afflow.

It is the quickest way to start a campaign without having to constantly deal with problems such as the offer reaching cap or going on pause. You simply grab a link and run it, knowing the traffic will always go to the best performing offers.

Plus, we thought that if we could make it work with Afflow, then it would be much easier to do the same with specific offers from affiliate networks, including exclusive offers.

After a quick look at the Monetizer dashboard we decided to pick Italy. It was the top geo by volume and we also noticed that it had some nice EPC spots which we could work on making profitable.

-Start with a generic monetizer link for Italy.
-Start with a RON campaign on Zeropark, then after a couple of days pick only the best-performing traffic segments (e.g. WiFi vs 3G, OSs, carriers).
-Create automatic optimization rules on TheOptimizer and let it optimize our campaign.

See the chart below for a breakdown of campaign stats and what actions were taken when.

For the first week, daily records were logged. For subsequent weeks only a weekly record was logged as most of the optimization tasks occurred in the first week.

Here is an animation that shows the actual numbers from TheOptimizer’s dashboard, for each period recorded in the table above:

Basically the only thing we had to do manually during the entire period, was play around with bids to see how the campaign reacted, and blacklisted non-performing offer IDs from our monetizer link.

The rest of the optimization – such as limiting placement spend, and pausing the campaign on bad days – was done in the background by theOptimizer, via the 3 rules we had set up.

The 3 rules were as follows:

RULE 1: Block publisher if spent more than $0.5 with no conversion. This is to keep bad targets from draining our budget. 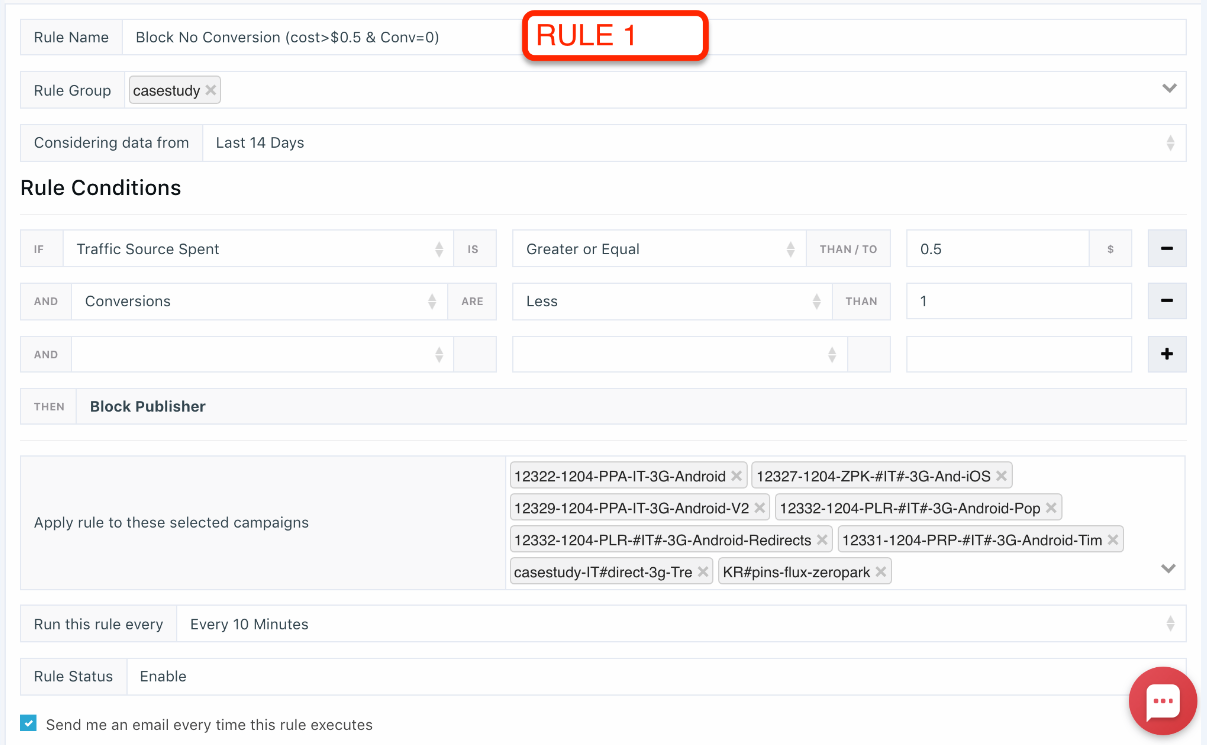 RULE 2: Pause campaign if spent more than $20 and had no conversions In the event that conversions were to stop happening for any reason, this rule ensures we’ll only lose a maximum of $20. 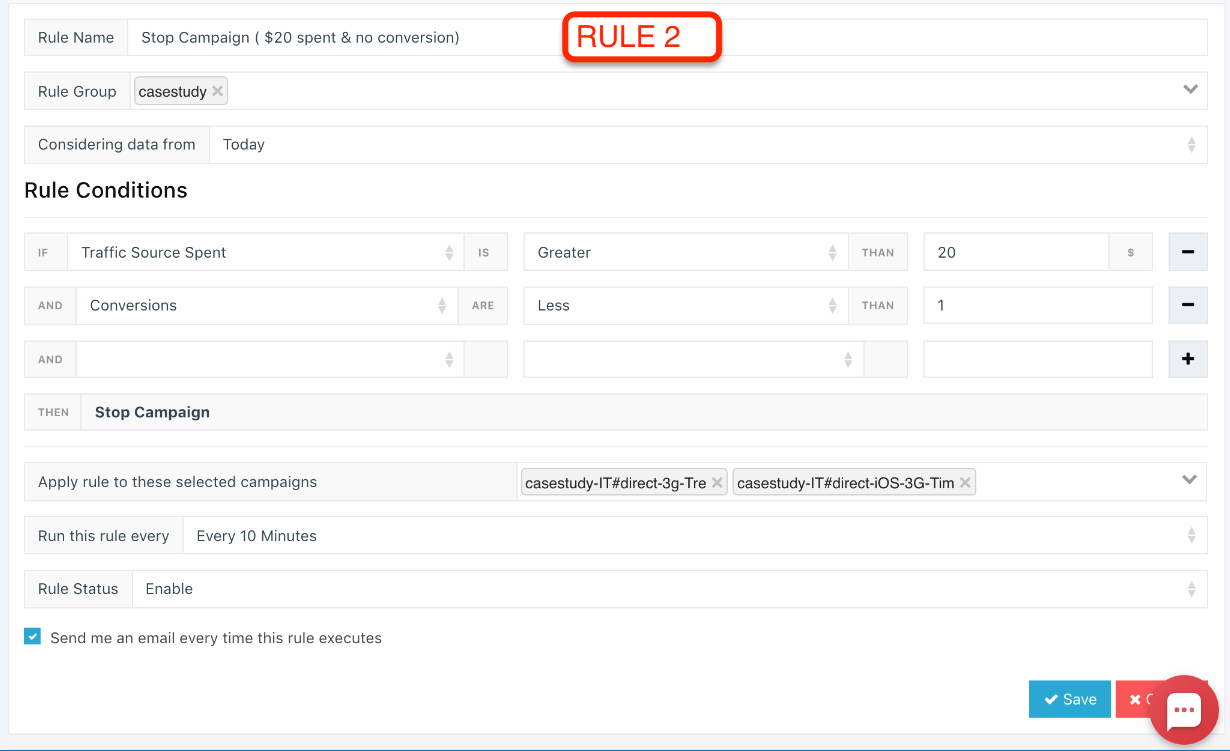 RULE 3: Resume profitable publishers If a target is blocked by error, for example if late conversions change a target from red to green, this rule would re-activate those targets. 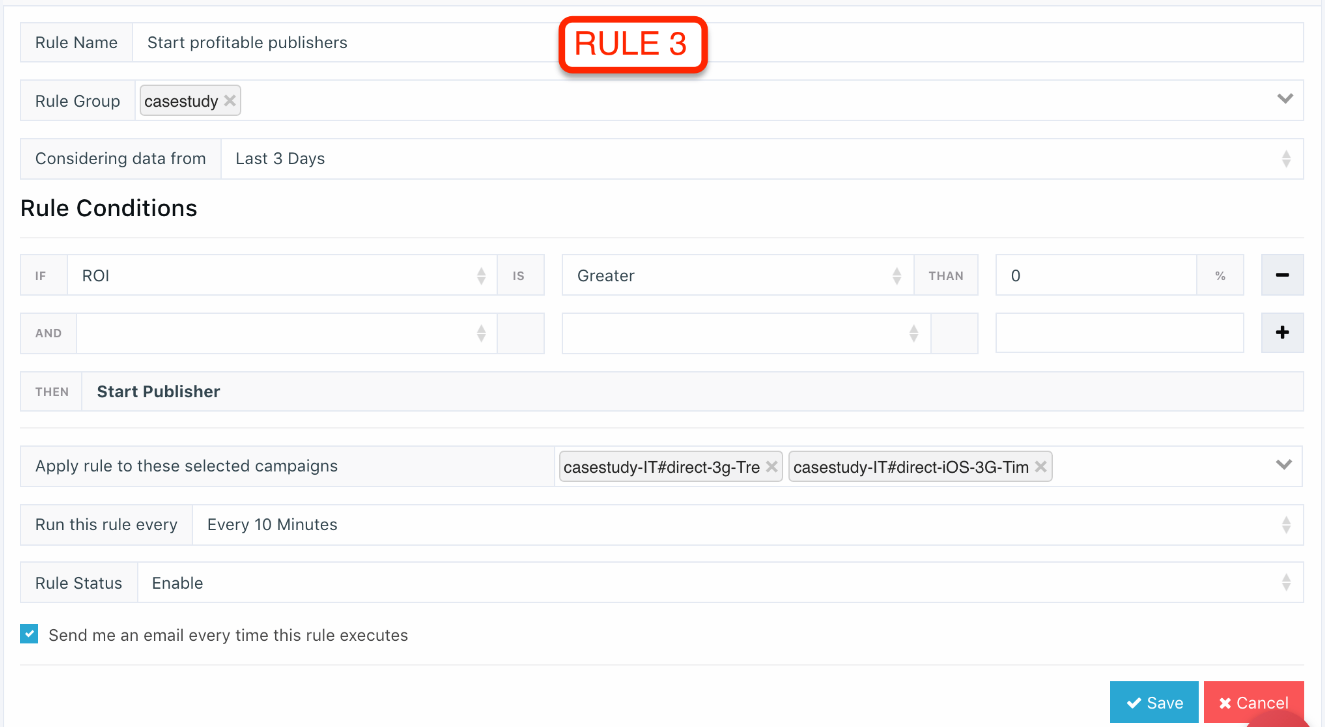 Some easily-measurable benefits of this automatic optimization are:

-A total of around 1000 targets with $0.50 spent and no conversions were blocked, resulting in an estimated $500 saved. In reality if we were to pause them manually, we wouldn’t have caught every one of them at the $0.50 spend, meaning a lot of these targets could have overspent past the $0.50 mark. Thus actual savings would have been more than the $500 calculated.

-Campaigns were automatically paused more than once when performance went down due to offers getting pause or other technical problems. This also saved us a lot of money.

-A lot of time was saved.

Now, as promised, I’m going to share all the data collected during this case study so that everyone interested in giving this a go can easily do so.

Step 1)Generate a link in Afflow/Monetizer

As shown on the screenshot below:

Step 2)Create the campaign on Zeropark

-Create a whitelist campaign with only the top-performing targets from these files (choose based on performance as you please):

Budget = $20 (increase if performance is good)

Create the rules on TheOptimizer as shown in the screenshots above, so that they will start executing as soon as the campaign starts getting traffic.

-If we were able to have profitable campaigns simply with a Monetizer smartlink, it should be much easier and stable with direct offers from networks.

-Automation is a must if you are looking to scale your Pop campaigns. It is almost impossible to do manually even with one campaign

-Exploring high bids is a must. Many times affiliates do the mistake of wasting all their testing budget with low bids and then at the end giving up. Low bids never worked for us, we only started seeing some good results once we started being on the top 3 positions.

-On zeropark don’t try to be 1st; The estimations zeropark shows regarding positions or top bids are not real time so you should not base your decision on those. If you found a winning bid that allow you to spent a decent amount daily and have good results just stick with it.

-Keep an eye on the targeting and make the necessary changes if a given device, OS or carrier is not performing good.

So that’s it! The entire method laid out in detail. Many thanks to theOptimizer for allowing us to share this case study with the forum!

Note that the above case study only involved a single geo. If you don’t want to be competing with a bunch of other members (there will inevitably be people that will try to rip this campaign in its entirety without changing anything), pick some other geo+carrier to target – my Afflow tutorial goes into detail on how to choose highest-performing geo+carriers:

Also note that Zeropark isn’t the only pop traffic source you can use theOptimizer on. PopCash and PopAds will also work – however, you may need to tweak the method a bit to cater to the different interfaces and campaign options.